Racism is a topic that I always fall back into. I learnt quiet a lot about it through the novel “To Kill a Mockingbird” by Harper Lee and it really fired up something inside of me of how unjust it all is and it’s all because of race. It’s also because I can relate to it too because I am a New Zealand born Chinese. Growing up in New Zealand and being Chinese has had some issues as well as living in Australia. Even though I didn’t get much of the racist comments when I was in Australia, my sisters did and they have told me their stories. I remember when I was little, I would see people getting bullied for being Chinese and I would say that I’m Malaysian, which is technically true, but not really (my parents are Malaysian born Chinese and our ancestors are from China). I would pretend that I wasn’t Chinese to avoid that. I would much rather be something else than be proud of my heritage. But as I’ve gotten older, still getting racist comments, I just don’t give. It’s just my everyday life that I’m used to it.

This reminds me of an article I read this year of a New Zealand Chinese entrepreneur, Deanna Yang, who was featured in a Visa pay wave ad, and tagged in an Instagram post, holding up a cookie against her cookie bus in the background. 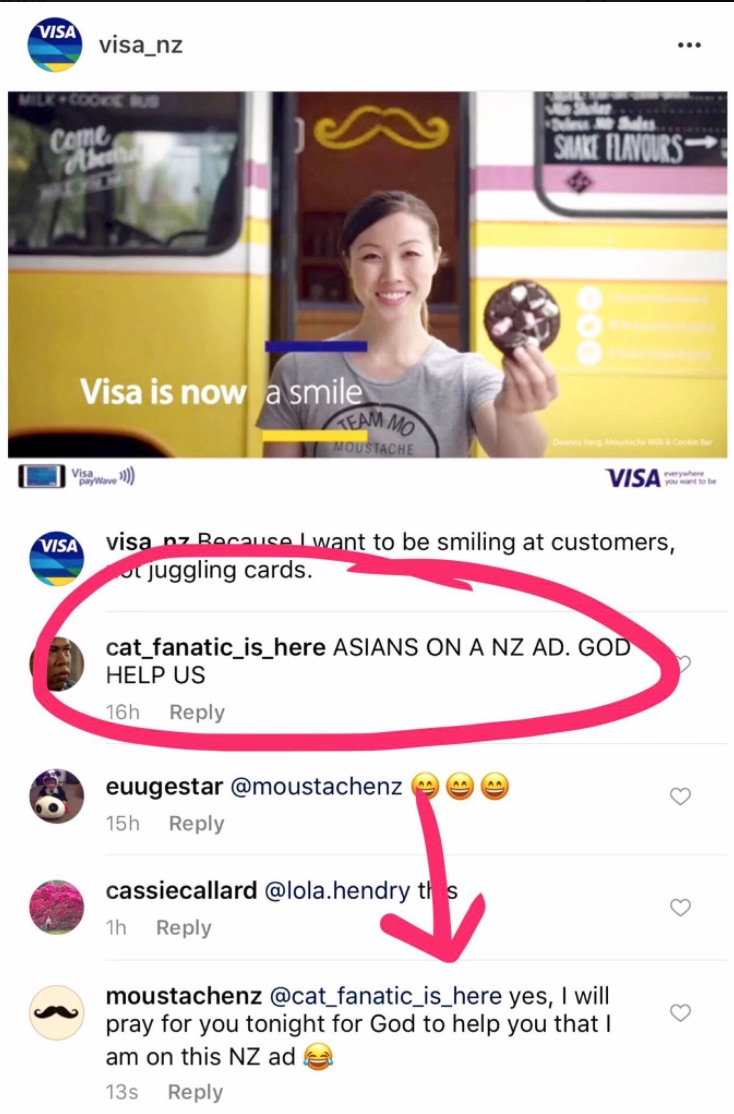 moustachenz. “praying for my kiwi brothers & sisters tonight that GOd may be with them in this difficult time…“16 March 2017, Photography, Instagram.  https://www.instagram.com/p/BRsg3KAjDM9/?taken-by=moustachenz&hl=en

One of the comments said: “Asians on a NZ ad. God help us.” (cat_fanatic_is_here). In reply to this incident and to what a New Zealander looks like she wrote, “I don’t know if it’s wrong or right that I have been conditioned my whole life to accept strangers on the street screaming at me that I’m an Asian cunt or to “Go home“. But truly, after 26 years of it, it is something I have come to accept & simply shrug off when it happens.” (Yang).

Due to what I have written so far, I think something that really sparks my interests/ fuels me in the inside is racism. I think I would like to go into specifically in New Zealand and around Chinese people. I think there is quiet a bit to talk about here and it’s an issue. It may not be the biggest one around compared to like the African Americans in America, but it’s still an issue.

So, Racial Discrimination. What is it?
noun
discrimination, unfair treatment or bias against someone or a group of people on the basis  of their race (Collins English Dictionary).

Human Rights Commission
How you can expect to be treated.

Above is how we can expect to be treated living in New Zealand. However, we are not. We get harassed. We get taunted. We get teased because of our colour, our accent, the way we dress, the food we eat or anything else related to our race or ethnicity.

Kiwi Asian Meme
To understand Racial Discrimination towards specifically Chinese in New Zealand, here are some videos that show this. I came across these YouTube videos made by some New Zealand University students a few years ago, who made a four part video project about Kiwi Asian Memes. ‘We did this to tackle the Asian stereotypes, and used Kiwi-Asians as an example to show that we are all one, diverse culture in New Zealand.’ (Xana)

I really like how Xana and her group did this project in four parts, showing the different situations of how people think about the Chinese Culture. The teacher just assuming that she knows all the answers or how in New Zealand they think all asians look the same or are somehow related and all that. It’s really good to see that these different situations are portrayed and people are doing something about it, making videos and putting them out there for people to be more aware and showing that we are all one, diverse culture in New Zealand.

All videos are linked below:

What my Friends think my Culture is – https://youtu.be/IIhjEc8cQ5Y

What my Teachers think my Culture is – http://youtu.be/7HprDu5C4p4

What New Zealand thinks my Culture is – http://youtu.be/KjlrU0hmz4w

What my Culture really is – https://www.youtube.com/watch?v=Fucu8oFYjAY&feature=youtu.be

Casual Racism
Casual racism is one form of racism. It refers to conduct involving negative stereotypes or prejudices about people on the basis of race, colour or ethnicity. Examples include jokes, off-handed comments, and exclusion of people from social situations on the basis of race. (That’s Us)

Also known as Microagressions.
“Microaggressions are the everyday verbal, nonverbal, and environmental slights, snubs, or insults, whether intentional or unintentional, which communicate hostile, derogatory, or negative messages to target persons based solely upon their marginalized group membership.” (Sue)

Racial Microaggressions:
• “An Asian American, born and raised in the United States, is complimented for speaking “good English.” (Hidden message: You are not a true American. You are a perpetual foreigner in your own country.)” (Sue)

Even though it is just a joke, or whatever you may say after someone points out that it is racism, it’s still racism. Racism shouldn’t exist, let alone casual racism. So it is important that people are aware of this issue in our world because that little casual racist remark, could turn into something big. “Casual racism is one of the biggest contributors to what develops into further arguments, fights between different races…I think we need to stop it at the source, which is the casual racism, and that’s just simple things like people walking around and throwing around stereotypes as if it’s a joke,” said Te Ariki Te Puni, the winner of last year’s Race Unity Speech Competition. (Gordon)

That’s Us
This website, That’s Us, ‘is New Zealand’s first anti-racism campaign that asks Kiwis to start sharing our own personal stories about racism, intolerance and hatred as well as our hopes for the future.’ (That’s Us). This campaign was launched on the 1st September 2016 and has reached out to over 2 million New Zealanders so far.

What I really like about this campaign is that it’s really for the people. It also includes everyone to be part of it, to be part of something to make Aotearoa a better place, a place in which people of all ethnicities call home. We get really true, raw, unedited stories from people who are just like us. No one else is telling their own stories but themselves and that what makes this anti-racism campaign so great and unique. It also does really well in giving context and information about what racism is and how we can deal with it, and I think standing up and telling people about their own personal stories and having it available for people to see is the first step for people to understand what racism is.

“WE ARE AN OPEN AND WELCOMING COUNTRY THAT CELEBRATES DIVERSITY. WHEN WE SEE RACISM AND DISCRIMINATION WE NEED TO STAND UP AND SAY THAT’S NOT US. STAND UP TO RACISM — THAT’S US.” (That’s Us)

Opinions
Below are quotes from Chinese New Zealanders who have written on the ‘That’s Us’ platform and shared their stories and opinions as well as others.

‘The first step in tackling racism in New Zealand: stop telling people to ‘get over it’ and start actually acknowledging their experiences, says Ally McCrow-Young.’ (McCrow-Young).

‘I’ve never felt more like a Kiwi until I moved almost 20,000 kilometres away from home, to Sweden.’ (McCrow-Young).

‘But let’s put words into action and start acknowledging the facts by respecting peoples’ experiences. No one should have to prove the extent of their Kiwi-ness or be dismissed with an eye-roll at any mention of racist remarks.’ (McCrow-Young).

David Fong also shared his experiences and his thoughts about racism in New Zealand and talked about the first three questions he gets, “Where are you from? No, where are you really from? Do you work in IT? Usually, that is the spirit of the questions I get most of the time.” (Fong). He also talked about that idea of ‘Citizenship vs. Ethnicity vs. Cultural Identity.’ which I thought was really interesting. “A lot of people don’t understand the concepts of citizenship, ethnicity and cultural identity and getting these concepts mixed up causes a lot of tension. So we might describe someone as an English citizen, but they may be ethnically Indian. I am a New Zealander by citizenship and by legal definition, my ethnicity is Chinese, and that is genetics. My cultural identity is more fluid, there is, of course, my Chinese ancestry but a lot of my identity is also about being a New Zealander. I’ve also lived around the world, in Colombia, Germany and Finland and these experiences also impact on my personal culture.” (Fong).

I think this is really interesting how he talks about Cultural Identity, and how he has a mixture. We shouldn’t be defined by one culture, as we could have many depending where we have been and what we have done. It’s like another idea within ethnicity.

“But. This is me. I am a Yang (and proud). And when I look into the mirror, I am indeed Singaporean Chinese in descent. It is an awkward place to be. Growing up in a country where as a child you are constantly shown that because of the colour of your skin, you are not as worthy to be here, that you are less than others, that you, no matter what you do, will never truly be considered a “real New Zealander”. You live a split identity. Neither here nor there.” (Yang)

“In the grand scale of things I think most New Zealanders are pretty great at accepting other cultures, colours and creeds…We pride ourselves on being less racist than Australia or America, but let’s be honest, that is a pathetically low bar.” (Williams)

“…a quiet undercurrent of unnecessary nastiness towards minorities and recent immigrants. I say recent immigrants, because my view is that we all came to this Island paradise from somewhere else. There’s nothing more Kiwi than coming over here, and taking Maori land, then complaining about Chinese people coming over here and taking our land. Our country was built on immigration, and that’s what makes it great.” (Williams) I really like what Guy Williams has said here about how we all come to New Zealand from somewhere else so it all makes us immigrants. “Our Country was built on immigration”, so we are are all the same, there shouldn’t be these different levels of dominancy in race and putting down minorities and tellings us to go back home.

It’s sad how us Chinese New Zealanders have to prove our Kiwi-ness to others in our own home. We may have a different look and different colour skin, but New Zealand is much our home as yours. People have to stop making judgements on looks.

McCrow-Young, Ally. “What’s the Deal with denial? A NZ Chinese Woman on ‘Kiwi-ness and Casual Racism.” The SpinOff. 26 October 2016. https://thespinoff.co.nz/featured/26-10-2016/whats-the-deal-with-denial-a-nz-chinese-woman-on-kiwi-ness-and-casual-racism/

Yang, Deanna. ” What does a Kiwi business owner look like? Well, not like me –  because I look Asian.” makinglittlecents, Medium, 17 March 2017. https://medium.com/makinglittlecents/what-does-a-kiwi-business-owner-look-like-well-not-like-me-because-i-look-asian-a111ab796968